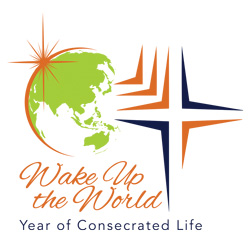 The Year of Consecrated Life provides everyone in the Church with the opportunity to reflect on the witness that people in consecrated life give.  Pope Francis has named three aims for the Church during this year; the same aims were named by St John Paul II for the whole Church at the beginning of the third millennium.

The first aim for the year is to look to the past with gratitude.

During this Year, it would be appropriate for each charismatic family to reflect on its origins and history, in order to thank God who grants the Church a variety of gifts which embellish her and equip her for every good work.

Apostolic Letter of His Holiness Pope Francis to all Consecrated People on the Occasion of the Year of Consecrated Life, 21 November 2014

We know that the Carmelite Order, unlike other orders, does not have a founder, but has its origins in a group of hermits who lived on Mount Carmel at the end of the 12th century.

Carmelite spirituality is characterised by two features.  The first is its Elijan trait which the Carmelites developed living as they did on Mount Carmel, the scene of the great prophet’s deeds.  Its second feature is an intimacy with Mary in our spiritual life, eloquently witnessed by the title of being her brothers and the dedication of the first Church on Mount Carmel in her honour.

In every Eucharistic celebration, we look to the past with gratitude, recalling the work of God, and God’s relationship with us, throughout the history of salvation.  When we celebrate the Solemnity of Our Lady of Mount Carmel, we can specifically recall how God has worked through those who established the Carmelite Family and who have contributed to it over the course of more than 800 years.  Let us give thanks for how the mission of Christ has been lived out over that time through the unique charism of the Carmelites.